Sieg heil (the Pledge of Allegiance) 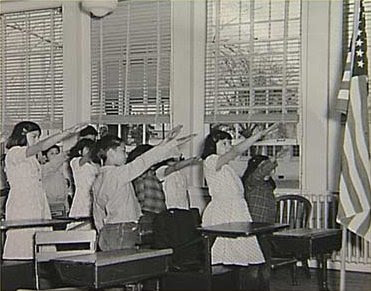 When I read this article by Shadia Drury about American style fascism I thought she was generally correct but overstated her case. Specifically, here

John McCain and Sarah Palin represent the newest faces of American fascism. Like everything American, the face of American fascism is stylish and dashing. With her Valentino clothes, Sarah Palin combined the wholesomeness of motherhood with the glamour of a beauty queen and the fanaticism of the Christian Right. John McCain was the war hero with all the scars of battle. His favorite slogan in the presidential campaign of 2008 was “Stand up and defend our country from its enemies! Stand up and fight! Fight! Fight with me, my friends.” His message was devotion to the nation and struggle against its enemies—external and internal.

McCain and Palin are not fascists (McCain more so that Palin, who actually has a history of involvement in proto-fascist politics*) but made pseudo-fascist appeals (also see here) in their campaign which play upon the sentiments that have historically fueled fascist movements. I find this to be an important distinction; and in fairness to Drury, I think it's inherent in the context of her article, but she doesn't quite make it explicitly.

In the 2008 campaign, McCain and Palin relied heavily on innuendoes regarding the treachery of their political opponent. Robo-calls informed voters that Barack Obama had a close association with Bill Ayers—a terrorist enemy of America. Then there was his relationship with Reverend Jeremiah Wright, who believed that the terrorist attacks of September 11, 2001, were a divine punishment for the evils of American foreign policy. Palin could not understand how anyone could stomach Reverend Wright’s raucous denunciations of America. To the radical nationalist, all criticisms of the nation smack of treason. The upshot of the matter was that Obama was allied with the enemies of America, and he was about to weasel his way into the White House! It is no wonder that the crowds at her rallies were crazed. They shouted: “Kill him!”

When a few brave journalists noted the ugliness of the Republican rallies, McCain defended his supporters, saying that they were sincere, patriotic Americans. They were indeed sincere, but they were not patriotic. They were rabid nationalists wedded to a dream and a fantasy that Palin called “the real America.” Palin’s “real America” is on the side of God and his angels. It respects the rule of law. It fights only just wars against evil enemies. It does not bomb unarmed civilians. It does not torture prisoners of war. It does not imprison innocent people without charge or trial. In truth, the “real America” is as fictitious as Sleeping Beauty. A life dedicated to this fiction can only be characterized by lies, cover-ups, and an interminable struggle to destroy the “enemies” of the “real America” at home and abroad. If the Republican Party hopes to become a civilized governing party again, it must suppress the fascistic nationalism of its “base” that it has so cynically and slyly nurtured in order to attain and hold on to power.

Keep that last sentence in mind as you watch the video of a local Republican townhall below, courtesy of David Weigel.

Weigel summarizes the video as such:

A woman gets up, holding a baggie containing her birth certificate, and unleashes a rambling, minute-long tirade tirade about how the president is a “citizen of Kenya.” The crowd hoots and cheers when she’s done. Castle responds, diplomatically: “Well I don’t know what comment that invites. If you’re referring to the president, then he is a citizen of the United States.” That elicits roars and boos from the crowd, so Castle presses on. “You can boo, but he is a citizen of the United States.”

So here’s one of the least conservative members of the House GOP conference, in a state that gave the Obama-Biden ticket 62 percent of the vote, and he has to deal with the angry howling of birthers.

Weigel left out the creepiest part, however. At the end of the video, the same woman stands up and "suggests" they say the Pledge of Allegiance. I put "suggests" in scare quotes because when you actually see the footage you'll notice by her tone that she's suggesting nothing, she's demanding the Pledge be said as some sort of magical litmus test of patriotism to distinguish themselves from un-American usurpers like Barack Obama - she actually takes over the meeting at that point. I suspect, also, that she had her suspicions about Rep. Castle, too. Maybe she thought he'd burst into flames or something if he wasn't a "real American" and tried to recite the Pledge.

I couldn't help but recall this passage from Robert Paxton in The Anatomy of Fascism.

No swastikas in an American fascism, but Stars and Stripes (or Stars and Bars) and Christian crosses. No fascist salute, but mass recitations of the pledge of allegiance. These symbols contain no whiff of fascism in themselves, of course, but an American fascism would transform them into obligatory litmus tests for detecting the internal enemy.

*And Christian nationalist associations which have to be seen to be believed (e.g here and especially here.)
Posted by Hume's Ghost at 7/20/2009

And, of course, there's the Family. See digby today, also.

For an old Heinlein fan (hey, you can educate a libertarian, but you can't remove the deep-seated wish for a simpler, rational, universe), it's eerily reminiscent of "If This Goes On."

Maybe she thought he'd burst into flames or something if he wasn't a "real American" and tried to recite the Pledge.

That line offers the best insight into the Right Extremists minds. In their Zealotry, they know the False Ones, Socialist America Hating Democrats can not mouth the words of the True Faith.

"McCain defended his supporters, saying that they were sincere, patriotic Americans. They were indeed sincere, but they were not patriotic. They were rabid nationalists wedded to a dream and a fantasy that Palin called “the real America.”

A little quibble about Drury's statements. What really is the difference between patriotism and nationalism? I am not so sure one can put these words in such mutually exclusive terms. True, some expressions of patriotism/nationalism may be more belligerent than others. But do these words means something completely different? I don't think so.

And as I do recall, there was some video that showed that McCain was becoming uncomfortable with his unhinged audience.

Regarding the video, that lady is nuts!

"What really is the difference between patriotism and nationalism?"

I consider Thomas Paine a patriot, Sean Hannity a nationalist. That's the difference, as far as I'm concerned.

Re the image of schoolkids -

When I first learned the Pledge of Allegiance, we raised our right arms as shown. This practice stopped in 1942 because of the similarity to the nazi salute. Then they added the under god stuff so I quit saying it.