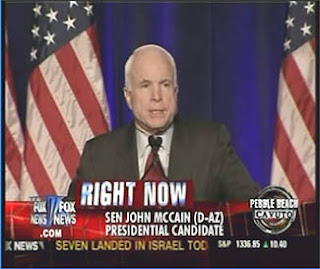 h/t Crooks and Liars
This is the second time that Fox News has "accidentally" identified a Republican the conservative movement does not like as a Democrat (the first being Arlen Specter.) This is truly sinister. And after watching John McCain get booed at CPAC yesterday, it's hard to escape the realization that the Republican party has been captured by ideological zealots who seek to impose an orthodoxy on the party that borders on theological rigidity. The only thing I can think of that compares to this kind of in-party paranoid hatred is the old John Birch Society thinking that Dwight D. Eisenhower was a communist agent.
Having surfed on a regular basis blogs on which commenters express their desire to see RINOS (Republicans in Name Only) hanged to death for treason, it is utterly troubling to see something that is supposed to be a news network helping to perpetuate that kind of extremism.
Posted by Hume's Ghost at 2/08/2008

Fox has also identified Lamar Alexander as a Republican. link

See, that's what happens when you watch Fox News, they even start confusing the critical thinkers like your self H.G.! LOL :)