Ever wonder why Americans don't get science?

Chris Mooney of The Intersection and his co-blogger Sheril Kirshenbaum have a book coming out July 13th titled Unscientific America: How Scientific Illiteracy Threatens our Future about how the disconnect between what scientists and the general public know is not such a good thing. The book's homepage describes the thesis thus:

[S]ome of our gravest challenges—climate change, the energy crisis, national economic competitiveness—and gravest threats--global pandemics, nuclear proliferation—have fundamentally scientific underpinnings. Yet we still live in a culture that rarely takes science seriously or has it on the radar.

For every five hours of cable news, less than a minute is devoted to science; 46 percent of Americans reject evolution and think the Earth is less than 10,000 years old; the number of newspapers with weekly science sections has shrunken by two-thirds over the past several decades. The public is polarized over climate change—an issue where political party affiliation determines one's view of reality—and in dangerous retreat from childhood vaccinations. Meanwhile, only 18 percent of Americans have even met a scientist to begin with; more than half can't name a living scientist role model.

For this dismaying situation, Mooney and Kirshenbaum don't let anyone off the hook. They highlight the anti-intellectual tendencies of the American public (and particularly the politicians and journalists who are supposed to serve it), but also challenge the scientists themselves, who despite the best of intentions have often failed to communicate about their work effectively to a broad public—and so have ceded their critical place in the public sphere to religious and commercial propagandists.

Over at Island of Doubt, James Hrynyshyn notes that the recent passage of a cap-and-trade bill through the House despite a Republican rep. from Georgia calling global warming "a hoax" and being applauded for it by other Republicans is a perfect example of what Mooney and Kirshenbaum are talking about. If we manage to finally take action on climate change, it will be despite the fact that millions of Americans are misinformed about the subject and despite the fact that the media - not just the Republican noise machine - continues to misinform them.

Take, for example, the case of the "suppressed" EPA analysis of the climate change bill. For several days now, I've been hearing on AM radio, Fox News, corporate/industry funded "think-tanks"and the Drudge/Malkin-sphere of the net how the Obama administration is manipulating the science of climate change for political ends because the EPA did not include in its report a 98 page document generated within the agency that questioned the science of global warming. James Inhofe - possibly the most intellectually dishonest person in the United States Congress - is now calling for an investigation of this.

I'm sure it will come as a huge surprise to find that:

1. This was a "report" the same way Jame Inhofe's bogus "minority report" was a report. (See "the most intellectually dishonest person" link.) Two non-climate scientists working for the NCEE (a branch of the EPA) decided to put together some unsolicited comments about climate change for the EPA report.

2. Their "report" relied heavily on the work of a leading figure of an industry front group. And by "relied heavily" I mean that they basically transcribed a previous pseudo-scientific piece from that group's website.

Real Climate has the details. If you want to have some idea of how ridiculous this bit of global warming denialism is before reading the link, I'll go ahead and tell you that one of the sources cited by the authors is an astrologist who believes Hilter and Stalin were the result of cosmic cycles.

The Fox report I linked to above claims that this incident is similar to when the Bush administration censored James Hansen.

Um, er ... not quite. There is a world of difference between having a 24 year old political relations appointee who lied on his resume about where he graduated from college attempting to censor one of the planet's leading climate scientists and the EPA administrators rejecting pseudoscientific global warming denialist nonsense (putting it kindly) generated by non-climate scientists.

Yet, one need not look only to Fox News to see the manufacture of unreality spread to the public at large, as Media Matters notes that a CBS.com report uncritically reported the claim of this document that the planet's temperatures "have declined for eleven years." 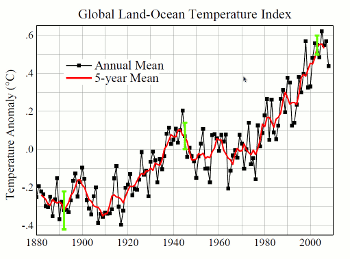 Yep, sure looks like declining temperatures to me. Tim Lambert, responding to an Australian politician who made the claim that there has been no warming for 15 years, quoted this blogger's apt response:

It's appropriate to end this post with a quote from Timothy Chase in recent reader comments:

... anyone who tries to establish the trend in global average temperature with much less than fifteen years data is -- in my view -- either particularly ignorant of the science, or what is more likely, some sort of flim-flam artist...