Bizarro world quote of the day 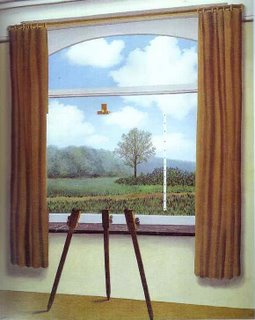 "It’s too bad, I think. DeLay was an effective leader, albeit too liberal in recent years. It’s possible, of course, that he did something wrong along the way. But there is no evidence of that in the public domain; as I’ve often said, the politically-inspired prosection of DeLay by Travis County’s discredited DA, Ronnie Earle, is a bad joke. As far as we can tell at the moment, DeLay appears to be yet another victim of the Democrats’ politics of personal destruction—the only politics they know. " - John Hinderaker at Powerline (via Crooked Timber)

The painting you see above is "The Human Condition" (1933) by Rene Magritte (another version of this painting was previously featured as the Art of the Day.) The point that Magritte was making is that reality is constructed out of human perception. I could try to articulate how the painting relates to the quote, but I think it works better if one can see the point for themselves.
Posted by Hume's Ghost at 4/04/2006