As I mentioned before, I've been reading (and am now a few pages short of finishing) Tim LaHaye's first Left Behind novel. The most impressive thing about the book is that the quality of writing gets progressively worse, page by page.

My having read the Left Behind book is one of the reasons I could state with confidence after watching McCain's ad depicting Obama as Antchrist that "there will be many a Tim LaHaye reading 'liberal' hating Christian Nationalist who sees this commercial and will have the circuitry in his brain light up to say: Danger, AntiChrist coming!" If you've read the book, the way the ad draws upon the characterization of Carpathia (the Antichrist) to characterize Obama is obvious.

Well, Slactivist - who has been doing truly excellent and informative page by page analysis of the Left Behind series* - points out that Tim LaHaye noticed the ad borrowing from his books, too.

That steaming pile of spin from Brian Rogers is quoted in a Wall Street Journal article that also includes commentary from Tim LaHaye himself:

The End Times, a New Testament reference to the period surrounding the return of Christ, were popularized in recent years by the "Left Behind" series of books that sold more than 63 million copies. The Rev. Tim LaHaye, co-author of the series, said in an interview that he recognized allusions to his work in the ad but comparisons between Sen. Obama and the Antichrist are incorrect.

"The Antichrist isn't going to be an American, so it can't possibly be Obama. The Bible makes it clear he will be from an obscure place, like Romania," the 82-year-old author said.

Let me repeat the key part of that:

"LaHaye ... recognized allusions to his work in the ad."

The whole post is worth reading, but this part will help makes sense of something else I wrote in my previous post:

So beware the peacemakers, recoil in horror from Middle East peace talks, fear the United Nations, wet the bed over nightmares of a One World Government and keep a terrified, watchful eye on anyone who suggests that international relations might consist of anything other than hot and cold war.

With that in mind, it's also fairly obvious why Gerard Baker's satire about Obama touring Europe and the Middle East, magically bringing peace as he goes, is a dog whistle. Indeed, I consider it to be a more effective whistle than the McCain ad, which Slactivist says is:

The Baker piece, however, will make sense to a secular audience, who will get it as using a Biblical tone to mock expectations of what Obama presidency will accomplish; and yet it is also less obviously an appeal to the Left Behind novels. 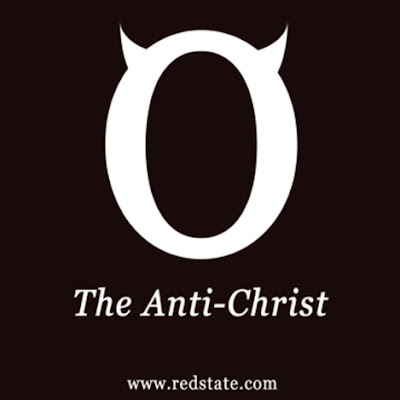 RedState is now selling this t-shirt as a "joke."

*If you have or haven't read the books, his archives on it are a fantastic resource. I plan on using them in several future posts, as I've already done in this post and this post.
Posted by Hume's Ghost at 8/09/2008

If you are interested in looking at who a real possible suspect anti-christ figure is then please take a look at my blog!