What exactly constitutes a war on religion? 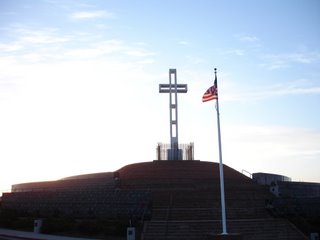 Over at The Daou Report, an entry from Blogs for Bush is linked to which finds that the removal of a cross at Mount Soledad in San Diego from city property is an example of "outright war against religion in this country" and that the cross was removed "so that atheism may be preferred," with it "appear[ing] that the preference of an athiest to not have a cross trumps the right of believers to enjoy their religion without discrimination."

So we see that the enforcement of the establishment clause of the first amendment constitutes "outright war" and not allowing Christians to violate that clause constitutes religious discrimination. Mark Noonan, the author of the entry, confuses secularism for atheism. If the city of San Diego were preferencing atheism they would have replaced the cross with something like this (sorry, I now have access to a scanner, but, unfortunately, I can not draw.) 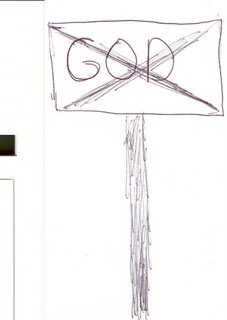 Update -Alonzo has written a post about militant atheists which complements this one nicely.
Posted by Hume's Ghost at 5/07/2006

Here is one time where I may have to disagree slightly. I think actions like this are just going to antagonize the religious. How else are they going to view it? Even those well schooled in the tenants of secularism (and how many are those) will have a hard time seeing how a cross that has been there in one form or another since 1913 is coercive.

As an agnostic/atheist I am worried about the rise of the religious right and the dangers of theocracy. But at the same time, we can't just erase history and tradition especially when it is not coercive or prone to cause indoctrination.

I have no issue with private groups placing religious symbols on public property. Its public, it belongs to everyone. So long as non-religious groups also have the right to put up non-religious displays. In order not to give the perception of a war agaisnt Christianity, we have to accept that the majority of Americans are Christians and we have to share this country. So while we should be vigilant against real transgressions of the separation of church and state, we need to be tolerant of ordinary, plain freedom of expression.

Anyway, as a matter of strategy I think arousing sleeping dogs is not the best way to advance secularism. Nedow's Pledge suit probably backfired and has encouraged more anti-secularism sentiment. (However, I agree fully with Gillespie a few posts down).

When I say I agree with Gillespie I mean that passing a law to that extent is a silly waste of time.

But, I don't agree that it takes 3 generations to learn English. My mother immigrated from Cuba in 1961 and learned English in a few years time.

I also quite sure she never had a need to sing the National Anthem in Spanish (though if she wanted to that would be fine).

If I moved to Italy or France with the intention of making that my home, I would endeavor to learn their anthems in their language. I would work hard to speak their language because a) its practical and maximizes my chances for success and b) its respectful to my new countries traditions.

However, there is a difference between encouraging language assimlation and passing a draconion (and unenforceable law) requiring it.

With respect to the comments: If you take away the obvious xenophophic ones -- I think most people are trying to express what I said above, but are just too ignorant and some too damaged by repeated listening to the Limbaugh, Hannity, ilk.

One could certainly argue that as a matter of strategy these sorts of lawsuits might be not be the most beneficial, and I agree that private groups should be able to express their religion on public property, but I believe it essential for government to remain neutral in matters of religion to assure that private groups have that right. I'm also not sure that erecting a permanent monument on public property is a first amendment right, however.

Would the cross bother me all that much if I were a resident of San Diego? No, probably not. I might even defend it remaining there on the grounds that it had become historic, but when I see someone arguing that its removal constitutes "outright war" on religion, then I'm going to argue the position I argued here, since this action constitutes strict enforcement of the Establishment Clause, but not an attack on a citizens right to practice his religion freely in the public square.

The question I would put to those who want the cross to remain would be this:

If Christians were a minority in San Diego and atheists a majority, and if the anti-God sign I drew had been on the hill since 1913 would they be ok with it remaining? Would they believe atheists justified in calling the removal of the sign an outright war on atheism?

If one can say, "yes, I'd be fine with it," then I really have no problem with that person defending the cross remaining. Myself, I'd answer, "no, it should go."

but when I see someone arguing that its removal constitutes "outright war" on religion, then I'm going to argue the position I argued here...

No argument on that point. I would do the same.

I was more arguing the point that I can see how it could be "perceived" as such by many (doesn't mean that such a perception shouldn't be corrected especially when exploited by authority figures).

The reality is that this particular culture war battle is subject to perception (because most Americans are not educated/critical thinkers and given the nature of our media).

And that strategically these actions do more harm to secularism by inspiring (or allowing some to inspire) fear among the religious.

Its also a bit petty and over zealous, particularly for something that borders on historic.

The real battles to me are making sure our classrooms remain secular, that our judges understand the historical foundation and importance of secularism, that science is allowed to proceed without ideological interference and that public policy is developed from a secular perspective.

For instance there are some countries (Sweden comes to mind) where they have had an "official" or "national" religion (where I'm sure much religious symbolism exists in public places) that are in fact in many ways more secular than we are.

We cannot continue to provoke (from their perspective) the religious and expect an understanding of the importance of secularism. I don't think the population is that sophisticated. Instead we have to make the religious comfortable with secularism. That means allowing some questionable displays of religious expression while making them understand why secularism is important to all people. They need to be made to understand that secularism is why Lutherans and Methodists and Catholics can live in peace and harmony. But Nedow like law suits are too distracting and make teaching the subtleties difficult.

I'm fairly sympathetic to what you're saying, but not regarding Newdow's Pledge suit. In this reply, Alonzo pretty much sums up my feelings on it. I would add that the state should not be allowed to enculture chidren to believe that to be patriots they must swear allegiance to a nation under God.

I'd be a bit more concerned about this if the cross in question weren't so butt-ugly. That said, I don't see what the problem is with keeping it where it is; it's a memorial with historical and cultural significance.

If it were to be established, as a basic principle of democracy, that no structures with religious themes may stand on public land, then the vast majority of historical buildings and monuments would no longer exist.

It's often said that the cure for bad speech is more speech, not censorship; I see something like the same principle here. I'd rather see lots of different cultures represented via memorials and other forms of communication than a blank space with nothing at all.

Oh, and regarding the "No God" sign -- if it were also a memorial with cultural and historical significance, sure, it should stay there too.

Thank you for the feedback, GK.