The slow death of a free press 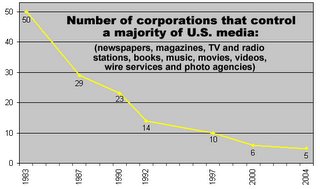 Upton, a Michigan Republican, cited the proliferation of broadcast stations, cable, satellite television and radio and the Internet as evidence that consumers have sufficient choices to justify allowing companies to own more outlets.

"Common sense tells us that this explosion of media sources should eliminate any concern over a lack of diversity of views in the marketplace and competition," Upton said in a speech to the Media Institute.

Make no mistake, if these regulations are eased, the monopolization of the press will only accelerate. And when the means of disseminating information becomes consolidated in the hands of the few, democracy dies.
Posted by Hume's Ghost at 2/18/2006

Noam Chomsky likes to point out -- look, you say this media consoldiation doesn't mean anything and the news is objective, but if trade unions owned all the televisions and newspapers, wouldn't you expect their coverage to be subtly biased?

The madness of media deregulation is that many of its advocates (like the twits at Reason) percieve it as an empowerment of the electorate: real democracy is when people vote with their wallets, not when an elected government regulates the media to ensure the people have access to all sides of the story.