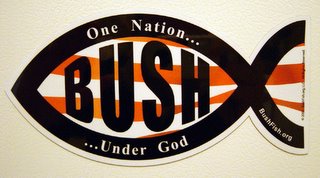 The problem is partly a matter of style. Mr Barnes gushes over his “insurgent leader”—and then supports his gushing tributes with even more gushing tributes from Mr Bush's staff, as if they meant something. But a problem of style rapidly becomes a problem of substance. The political sage of the Weekly Standard does not go so far, say, as North Korean Communist hacks when they praise Kim Jong Il as a hero for the ages. Mr Barnes is at least open to doubt. But he leans in that direction. - The Economist

The fact that The Economist saw fit to state that a book on our President written by a leading figure of the conservative movement leans in the direction of hero-worship that is demonstrated for North Korean dictator Kim Jong-il is symptomatic of a growing problem in America, which is thus: there is a significant portion of the population who in the aftermath of 9/11 are now willing to give deference to a central authority figure. This is troubling, as the foundation of our country was based on the rejection of that very principle.

Last week’s annual Conservative Political Action Conference signaled the transformation of American conservatism into brownshirtism. A former Justice Department official named Viet Dinh got a standing ovation when he told the CPAC audience that the rule of law mustn’t get in the way of President Bush protecting Americans from Osama bin Laden.

Former Republican congressman Bob Barr, who led the House impeachment of President Bill Clinton, reminded the CPAC audience that our first loyalty is to the US Constitution, not to a leader. The question, Barr said, is not one of disloyalty to Bush, but whether America "will remain a nation subject to, and governed by, the rule of law or the whim of men."

The CPAC audience answered that they preferred to be governed by Bush. According to Dana Milbanks, a member of the CPAC audience named Richard Sorcinelli loudly booed Barr, declaring: "I can’t believe I’m in a conservative hall listening to him say Bush is off course trying to defend the United States." A woman in the audience told Barr that the Constitution placed Bush above the law and above non-elected federal judges.

Glenn Greenwald in his work at Unclaimed Territory has observed that there is a cultish nature to much of the defense that is being given for the Bush administration's grabs at extraConstitutional power, where self-styled conservatives are willing to cannibalize (metaphorically speaking) any conservative who is not willing to jettison his conservative principles in deference to George Bush (see here and here.) I believe Dave Neiwert correctly pointed out that the cult of Bush was a product of the movement, not vice versa. Afterall, Bush was chosen to be a Presidential candidate because his name could get him elected and because his family connections could raise large sums of campaign funds, not because he was any kind of a figure within the conservative movement - in essence, he was a viewed as a vessel that could be used to deliver a Presidential victory for the movement.

Neiwert comes to the conclusion that what we are seeing is the birth of a political religion.

Using this model to frame the discussion, I think what we can readily see is that -- as with pseudo-fascism -- the conservative movement is still in a somewhat nascent stage as a political religion. The examples of more mature religions provide us with a fairly clear picture of where it's headed, however.

And it won't necessarily be under the leadership of George W. Bush. The discrete conservative movement is structured such that it needs a "charismatic" figure at its head; it's essentially a psychological imperative for this kind of belief system.

So if the leader it elevates happens not, in fact, to actually be charismatic, as Bush really is not, then the movement will tailor its reality to make him so. True Believers -- having been steadily propagandized with Fox News and RNC talking points about Bush's superior character -- now really do see Bush as a charismatic figure, which leaves most non-believers shaking their heads.

But he is in essence disposable, an empty suit filled by the psychological needs of the movement he leads. He's sort of like a Fraternity President on steroids: Bush's presidency is all about popularity, not policy. He's a figurehead, a blank slate upon which the movement's followers can project their own notions of what a good president is about. And when his term is up, the movement will create a new "charismatic" leader.

And here's an example of where such a religion might one day take us.
Posted by Hume's Ghost at 2/20/2006