Charles Darwin died in 1882, Marx in 1883. A mandatory presentation that was given to 1000 air force officers in England and e-mailed to 5000, however, asserted that Darwin and Marx were leaders of the totalitarian Soviet state - decades after their deaths! - and that's why the ideology of America is "theism." I am quite nearly speachless. Here's a key graphic from the hate-session, which was given under the pretense of being about suicide prevention 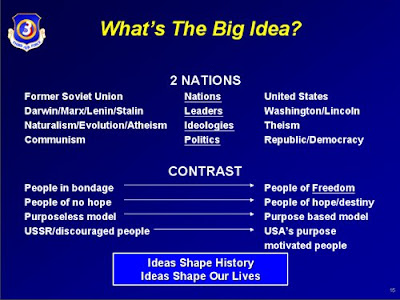 This is one of the most mind-numbingly dumb graphics I may have ever seen. First, evolution was rejected in the Soviet Union as being capitalist/fascist science in favor of Lysenkoism. Secondly, the contrast between the "ideology" of America and the Soviet Union is not Atheism/Theism but No freedom of conscience/freedom of conscience.* Thirdly, if you're trying to build a propaganda case for America being a theistic society Lincoln and Washington are hardly the best choices!

Lincoln was not a formal member of any religion and was theistically skeptical while Washington was basically a unitarian quasi-deist, as were many of the founders. [Source]

But more importantly, as Alonzo Fyfe puts it

This is a classic "us" verses "them" propaganda piece. Where "us", the "good guys", the ones who have lives worth living believe in God, and "them", "the enemy", "those the good guys are truly at war against", are those who do not believe in God.

As it stands, the people who used their air force authority to command attendance at this presentation should be treated no differently than if they had given a presentation in which "them" were the Jews and the nation of Israel, or "them" were blacks corrupting the pure and wholesome blood of the white race.

This case represents an abuse of authority and, unless it is punished, delivers the message that the official government position (the position that the government has the right to order those in uniform to learn) is that atheists are, in fact, the enemy, and deservedly regarded as such by all military officers.

We have a right to demand that the prestige and authority of the U.S. government not be put behind a message of hate such as this – and to punish those who use their authority as officers in the military to execute such a campaign of hate.

*Apparently, the person responsible for the graphic lacked the intelligence necessary to make the more obvious point of identifying Marxism as an ideology of the Soviet Union, which would at least have had the benefit of being true.

Update: I was remiss in not pointing out that one should read Chris Rodda's original post on this presentation for more on the context of this graphic.
Posted by Hume's Ghost at 12/02/2008

I come from the former socialist Yugoslavia and I could not agree more with you Saad. I have never even heard of Lysenko. All they thought us in school was Darwinian evolution.