Feingold guilty of a thoughtcrime 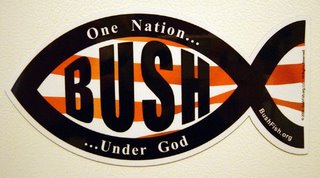 Mark Noonan (h/t Zack) has called for the censure of Senator Feingold for disloyalty to the Leader. Noonan states that to question the Leader is to threaten American security, and by implication says that anything less that blind obediance to the Leader is anti American, and what's more, treason.

Dave Neiwert explains the political faith that is necessary to hold such beliefs despite the evidence that the NSA surveillance program is unConstitutional and illegal.

One of the reasons the conservative movement has morphed into a pathological political religion is that it has managed to largely cut itself off from the real world by insulating itself from any kind of criticism whatsoever.

Criticism of right-wing programs and policies, you see, is never confronted on its own terms, but is dismissed with a wave of the ad hominem wand: it can't be right because the critics are Bad People with Bad Motives.

And now a (tweaked) excerpt from 1984, inspired by the patriotism of Mark Noonan.

'Are you guilty?' said Winston.

'Of course I'm guilty!' cried [Noonan] with a servile glance at the telescreen. 'You don't think the Party would arrest an innocent man, do you?' His frog-like face grew calmer, and even took on a slightly sanctimonious expression. 'Thoughtcrime is a dreadful thing, old man,' he said sententiously. 'It's insidious. It can get hold of you without your even knowing it. Do you know how it got hold of me? In my sleep! Yes, that's a fact. There I was, working away, trying to do my bit -- never knew I had any bad stuff in my mind at all. And then I started talking in my sleep. Do you know what they heard me saying?'

He sank his voice, like someone who is obliged for medical reasons to utter an obscenity.

"Down with [George Bush]!" Yes, I said that! Said it over and over again, it seems. Between you and me, old man, I'm glad they got me before it went any further. Do you know what I'm going to say to them when I go up before the tribunal? "Thank you," I'm going to say, "thank you for saving me before it was too late."

'Who denounced you?' said Winston.

'It was my little daughter,' said [Noonan] with a sort of doleful pride. 'She listened at the keyhole. Heard what I was saying, and nipped off to the patrols the very next day. Pretty smart for a nipper of seven, eh? I don't bear her any grudge for it. In fact I'm proud of her. It shows I brought her up in the right spirit, anyway.